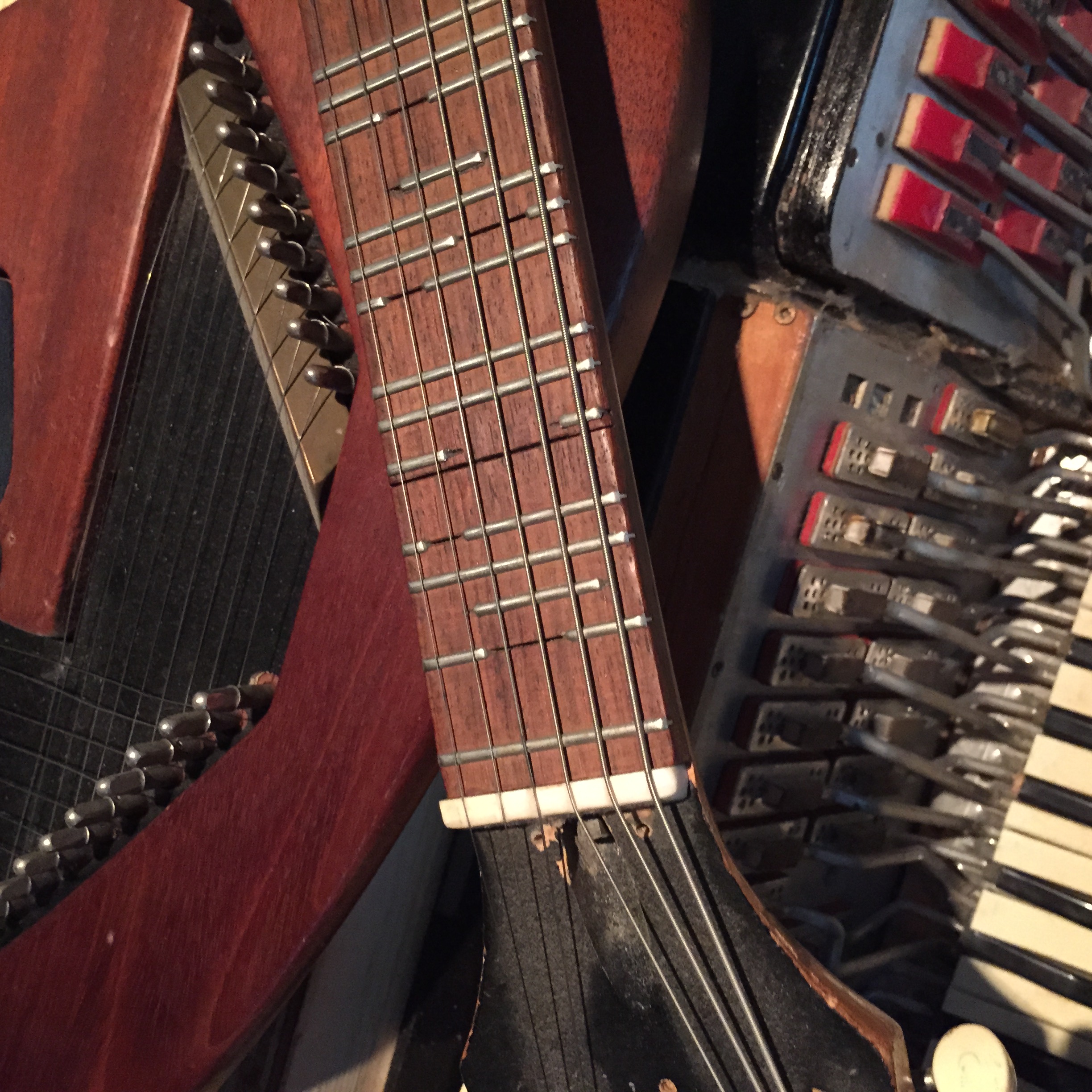 During a trip to Banff, where I was playing, banjo, mandolin and lap steel in the pit for the opera program, I was asked to play guitar for a cabaret show. I didn't have one, so I walked into the piano repair shop (now gone, which is incredibly sad) and asked the guys there if I could make a guitar. They laughed, of course, and then I explained I was going to make an incredibly simple electric guitar. They gave me some wood from crates for the pianos, piano tuning pins and I crazy glued in piano wire for frets and 5 hours later I came out with a guitar. I still play it some. Here it is on a piece I wrote for Maza Meze, recorded by CBC, lyrics in Esparanto.

I adapted an Ovation Breadwinner electric guitar, having it refretted into 19 tone equal temperament (EDO or TET), then added some sympathetic strings and a few piezo pickups built into the body. This was after working with a friend, Ernie Tollar, on an old Roland D50 synth that had this odd tuning built in. We figured out it was 19 tone so I built a guitar to go along with it.

This is a piece featuring a few tracks of this guitar.

Adapted Guitar/ based on Partch’s instrument

Adapted and refretted to the tuning requirements for performing the music of Harry Partch, it uses a subset of 43 tone just intonation on three courses of strings, tuned 8/5, 1/1 and 5/4.
Here's a short piece I wrote and played for Soulpepper's production of Home.
John Gzowski · Home

This is a two part instrument, a 10 string stick like fretboard with magnetic interchangeable fretboards for different tunings and a homemade infinite sustain system in combination with a tetrahedron shaped frame holding 40 electro magnetic sympathetic strings.

Here's a piece I did, its sort of a reharmonization of a Bach violin partita in free time using 31 tone equal temperament. There are no effects, all the sounds are from the instrument and the resonating strings.

Built with all pitches in Partch’s 43 tone just intonation available. Its quite impractical and plays a bit as a lumpy fretless guitar but with care and practice its possible to play, though chords are very difficult.

Accordion based version of Partch’s instrument. Two accordion keyboards were run through a bandsaw then bolted together. The reed banks were removed and reworked to allow the 8 octaves to play 43 tone just intonation and to give the instrument an audible range of two octaves. It uses only one reed bank and the bellows are used as foot pumps to run the instrument.